I think we can all agree that a dog's life is much too short.  I love older dogs, the gray muzzles, the sweet, knowing eyes.  Since I've been grooming for so many years, I have the privilege of knowing many dogs through all stages of their life from 6 weeks old to 18 years old.  Dogs, like humans, all age differently.  Some are like energizer bunnies, aging gracefully, acting like a pup til the day they leave this earth.  Others, are affected by their golden years much harder.

Most of the big changes we see are in mobility.  Their joints become arthritic, and some limbs just don't work as well as they used to.  In large breeds, many have a hard time standing for long periods of time, or even getting up into a standing position.  We also see vision and hearing problems, though most of the time the owners are more worried about that, than the dog is.

The hardest cases are the ones who have forms of Canine Cognitive Dysfunction.  These dogs are alot like humans afflicted with Alzheimer's.  They don't always know what is going on, and can become very agitated and upset by what used to be part of a good experience for them.  Interestingly enough, sometimes we get lucky and a formerly nasty dog will "forget" he didn't like grooming, and the final years of haircuts actually go better than ever before.  The ones that make me the saddest are the dogs that were the sweetest, loving enjoyable dogs to groom, who now want no part of it.  They don't want to be touched anymore, and show us with their teeth.

We do our best to accomodate these geriatric pets.  I wanted to touch on some do's and dont's if you have an older pet who needs grooming, as too many times, we struggle with owners on what will be best for their elderly friends.


I hope your dogs all age gracefully, and have long lives.  They are never with us long enough.
Posted by D at 9:30 PM No comments:

Mohawk of the Month

I am working on a few real blog posts, but thought you all deserved a MOHAWK! 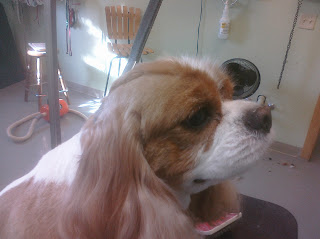 This guy is revisiting the mohawk after changing back to a more traditional look for a Cavalier King Charles Spaniel.  He just couldn't stay away from this tough guy look. 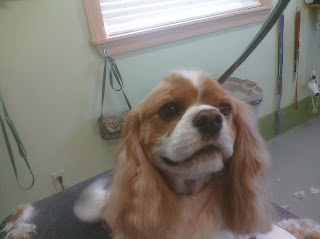 ﻿
On this particular day, J and I groomed 9 Cavaliers.  This was the only one sporting a mohawk, though.  (thank goodness, as the coat isn't really the best texture for this look)
On a sad note: recently the original mohawk blog post dog passed away.  I hope he got a chance to do everything on his list.
RIP, little guy.  For those who are new to the blog here is the link to his story.﻿
Posted by D at 6:47 PM No comments:

Email ThisBlogThis!Share to TwitterShare to FacebookShare to Pinterest
Labels: Mohawks

That would be Long. Luxurious. Lashes.

Not my favorite.  Customers seem to be obsessed with leaving their dogs eyelashes uber-long.  Now, before you all get crazy on me, saying "but eyelashes serve a purpose".  I'm very sure that is true.  However, the lashes of an extra long variety.. that's just weird.  Kind of like those people who grow out their fingernails for 8 years, just so they can get into the Guinness Book of World Records.  Yuck.

Really, we are talking LONG lashes.  Some dog's seem to grow them extra well, and some Shih Tzus or other flat faced breeds have lashes that reach well beyond their nose.  How would you like it if your eye lashes were getting in the water dish?  Annoying, Right??

However, the whole "customer is always right" deal makes sure we go to great lengths (HA HA HA..pun intended) to keep those lashes.  It's not as easy as it sounds.  Let's start with the fact that dogs don't always hold still.  A crazy concept.. I realize.  Nothing is worse that accidentally trimming off one set of eyelashes.  Whoopsie.. we'll have to grow those back. Try explaining that to a client who has been growing those babies out for 4 years.   Then, there is the whole logistics of it.  Breeds that grow these beauties will invariably have hair that grows over the eyes.  Of course, the owner wants the dog to be able to see.  That means trimming just the eye brows.. not the lashes, which will extend well past the eyebrow. So, we hold the lashes (once we get them separated from the hair of the eyebrow) down, then carefully trim the brow above it.  Dogs love this. Dogs hate this.  The other problem occurs when it's a dog that gets a banded topknot (ponytail).  Do we band the lashes up into the topknot?  No.. probably not, as that doesn't seem like it would be very comfortable.  Again, we are back to meticulously separating lashes from actual hair.


Here is a fine example of the 3 L's.﻿
﻿ ﻿﻿ Note I said this is a "he".  Apparently long lashes are not reserved for female dogs.  We probably see just as many boys with this request.  Probably the most popular breed people like long lashes on is the Cocker Spaniel.. no clue why, but they must look really, really good in them.  I wish I would've taken a photo years ago when we had a Miniature Poodle who had lashes at least 3 inches long.  It was crazy freaky.

I hope  you've enjoyed your lesson on the the 3 L's.  I just had to get it off my chest.  This blog is just so theraputic for me, you have no idea.