Does your pet have a metallic/fishy smell?

I haven't posted since November.  Family issues proved to be more important than blogging for a time.  Luckily, things are better now, and today's events reminded me that I need to take a little time out for blogging, just for some writing therapy.  I hope you enjoy.

J fielded a call today.  Luckily I was out of the room, and just walked in as she was taking it.  I didn't have to deal with this one.

The client on the other end of the line had a problem. They needed to buy some shampoo for their Labrador/Basset hound mix.  I really wish they would have called it a Bassador, that would have really added to the story I think, but they just had a plain old mixed breed dog.  The receptionist tried to tell him what kind of shampoos we carry (we carry very few, we can't compete with the chain stores), but he insisted he be transferred to the grooming department.  Wow, fancy.. we don't usually get called a department!  First, the problem:  His dog has a metallic/fishy smell.. is that normal for Lab/Basset Hound mixes?  Uh.. what the heck IS a metallic fishy smell?  I can't even picture it.. nor do I want to, sounds like it should possibly see a vet.  J didn't bother getting info on the smell, though she told him she really didn't think it was normal.  (for any breed)  He then wanted to know if our shampoos were affordable.  She told him they ran $8-10.  He said, WOW, that IS affordable!!  Problem solved.  I really hope he gets rid of that smell..

More fun.  Last week one of the receptionists called back to get a quote on a dog breed she couldn't find on our price list.  It was a Mountain Terrier... uh, ok.  I took the call and acted like I hadn't been prepped on what kind of dog they said they had.
Me:  Hi, I heard you would like a grooming quote.  What type of dog do you have?

Me:  So it's a small dog with a smooth coat?

I give him the quote, and surprisingly, he made the appointment.   In the meantime I google Mountain Terriers.  I've been burned before by people actually having a rare breed that I just haven't heard of.  Not to mention the time someone told me they worked with someone who owned a Taco Terrier, and after googling that, about 50 pictures and websites came up.  Go ahead.. do it!  According to google, Mountain Terriers are a very old American breed, formed in 2005. ;)  They originated as a cross of a Jack Russell Terrier and a Lakeland Terrier.  Seems like a good idea to me...

Mrs. MTO brought the dog in.  Again, I act like I've never heard of the Mountain Terrier stuff, though that is how the appointment has been made.  I refuse to pretend I can identify a Mountain Terrier on sight.. especially after google shows me this dog looks NOTHING like the dogs I saw on those webpages.

Mrs.MTO:  Oh.. haha.. well, people kept thinking she was a Rottweiler, and she's not a Rottweiler.  So, we started looking online, and since she had Terrier ears (??), we figured she was some kind of Terrier, then we saw Mountain Terriers, so that's what we say she is.

You know, if you are going to make up a breed for your dog, maybe just keep it to yourself.  It makes it pretty hard for groomers to give you a price quote.  Luckily she was fairly small and I was able to stay within the quote.


Yes, I have a picture.  Here she is, so adorable! 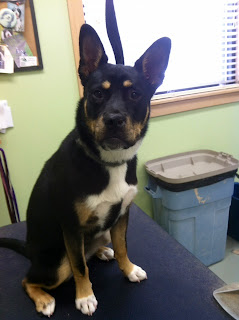 J and I said if anything, she looks like a Basenji mix.. which of course there is NO chance that is what she is.  Her coat is very dense, almost Shiba Inu-like.  But, she's too good for her nails to be a Shiba. :)  Terrier Ears?  I'd say German Shepherd ears... and Rottweiler.. not really. She does have a sizable underbite, maybe Puggle/Rottweiler?? Pugweiler?

I end this blog post with another cute baby I groomed today: 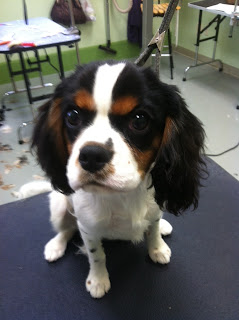