We get this all the time.  Everyone has an idea of how they want their dog to look.  "I want my dog to look like a Schnauzer."  "Don't make him look like a Poodle."  "Can you make him look just like this picture??"  (yeah, right).  Sometimes we even get referrals that way.  "Can you make him look just like Fluffy Smith??" Sure, why not.  The funniest one was the lady who wanted her Soft-Coated Wheaton Terrier to look like a cheerleader.  Yep, you read that right, a cheerleader.  But, only when she was laying on her back. (the dog was laying on her back, not the cheerleader.  I need to be clear, this is getting confusing)  It had something to do with her ears, looking like pom poms... luckily I wasn't the chosen groomer that time.  Thank Goodness!

The other day J got one of these requests.  She was to make the dog look just like Buster Brown.  Huh?  She brought this request to me, and I (obviously not up on such things) said "Isn't Buster Brown a Basset Hound, who was in the ads for shoes or something??"  The dog in need of said makeover was a maltese.. I wasn't sure how that would work out.  J didn't know.  Then I got the brilliant idea to google it.   Thank you smart phone!  Turns out Buster Brown (I'm sure many of you smart people know this) is a KID!  Well, a cartoon kid anyway..  we spent a bit of time laughing over that.   Seriously, isn't it bad enough we need to make dogs look like different breeds than they are?? Now we have to make dogs look like cartoon kids??  J did her best.. 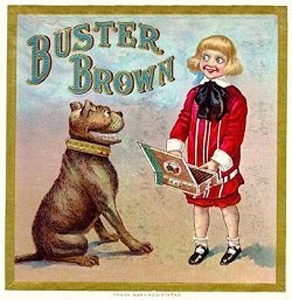 So it turns out he did do advertising for the Buster Brown Shoe Co.  However, it seems that in this photo he is offering cigars to his dog?? Interesting.  This sort of thing would not fly in 2011.  That poor dog! 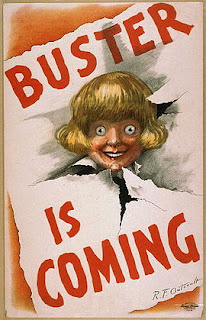 That's just plain creepy.. I really wouldn't buy shoes after seeing this ad.  It should read "Buster is coming to kill you in your sleep."  Cartoons have much improved over the years, don't you agree??   However, not too many people say:  "I want my dog to look exactly like Sponge Bob Square Pants" do they?  I guess it's the haircut the client was after, not the buggy eyes.  Here is the finished product, in it's crappy phone photo glory. 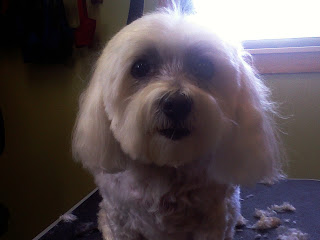 A fairly good likeness I think!
The client did seem happy.  We'll see if she comes back.
I think the dog looks a hell of alot cuter than Buster Brown!
Posted by D at 9:04 PM 2 comments:

I'm sure you think I'm about to write about some horribly neglected dog. Nope.  I'm talking about my poor neglected blog.  I feel bad for it.. but sometimes my life just gets in the way of blogging.  I just got back from a week's vacation.  SO.. this week I spent making up for that week off, because it was an unpaid vacation (like they all are).  Lucky for me lots of people wanted their dogs groomed this week, so my paycheck won't be as bad as it could've been.

Anyway, I'm working on a few new posts (ok, only working on them in my head so far), but until then, it's:


I bet when you started reading this blog you never thought I really did that many mohawks.. it's crazy.
Posted by D at 6:44 PM 1 comment:

An old man turned ninety-eight
He won the lottery and died the next day
It's a black fly in your Chardonnay
It's a death row pardon two minutes too late
And isn't it ironic... don't you think

It's like rain on your wedding day
It's a free ride when you've already paid
When your freshly groomed dog,
Meets a skunk the next day.
Who would've thought, it figures.

I think Alanis Morissette said it best.  Sorry, Alanis.. I just had to change the words a little a bit.  Our poor customer... pay good money to get your dogs groomed, only to bring them right back before 8 AM stinking to high heaven.  She said she wanted to sit down and cry.  I don't blame her.