That's my caption for the following photo.  That's J, grooming a gigantic Shepherd Mix who couldn't stand well.  She finished his groom on the floor.. in that crouched position! 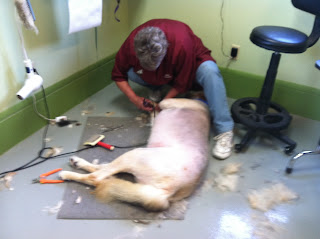 J told me she would like the caption to be:  I'm getting too old for this shit!  She also wanted it noted that she is 52 years old.  I guess groomers stay pretty flexible. :)  I've written about it before, we do what we have to do.  That dog just couldn't safely stand on the table.. so this is what happened.  Luckily, he was fine with relaxing and lay flat like that for her.

J had a pretty rough day today.  Here is another one of her challenges: 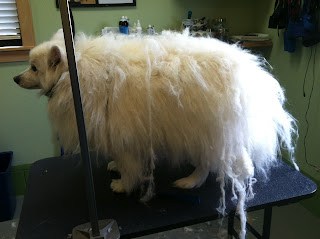 This picture does NOT do this mess justice.  It looked like one of those long curly haired sheep.. or maybe a small Yak.  It was actually an American Eskimo.. with the coat of two Samoyeds.  the owner gave strict orders that she wanted NOTHING cut on this dog.. she gets it groomed once a year.  She brought her other dog along today as well.  It didn't have an appointment.  She thought maybe J could just fit that one in too.  Uh.. not a chance. It was just as bad.  When J let her know that she would at least have to shave out the huge matts behind his ears, she said "well, I better go home and work on the other ones ears, so you won't have to do that to her!!"  Maybe, you could brush your dog for a better reason than that, like it JUST NEEDS BRUSHING?? Maybe?? 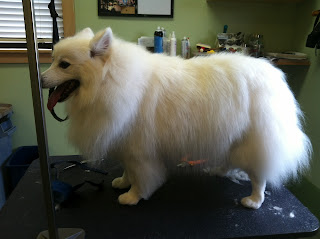 Here is the hair that came out.  There was another huge pile in the tub. 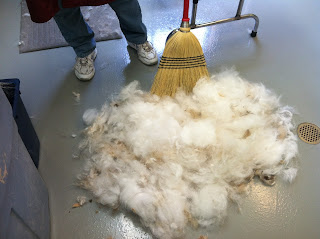 Here's one of mine.  A shelter dog, I donated a groom for.  My guess is this little guy is only around 9 months old.  He was PERFECT for his grooming, and I am certain it was his 1st ever.  Someone will get a really great dog when the adopt him!

Here he is before: 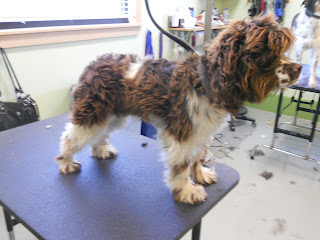 He had a little excess facial hair.... 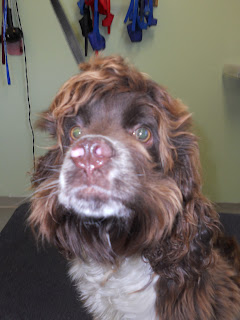 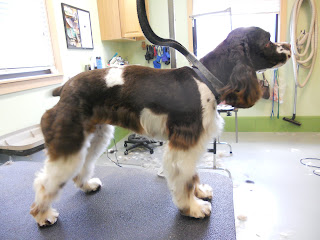 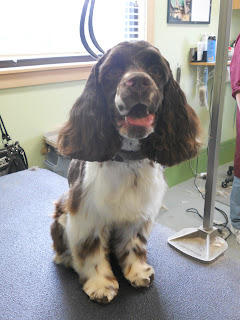 If you or anyone you know is looking for a dog, visit your local shelter.. you will be surprised what you find there!
﻿
Posted by D at 10:54 PM